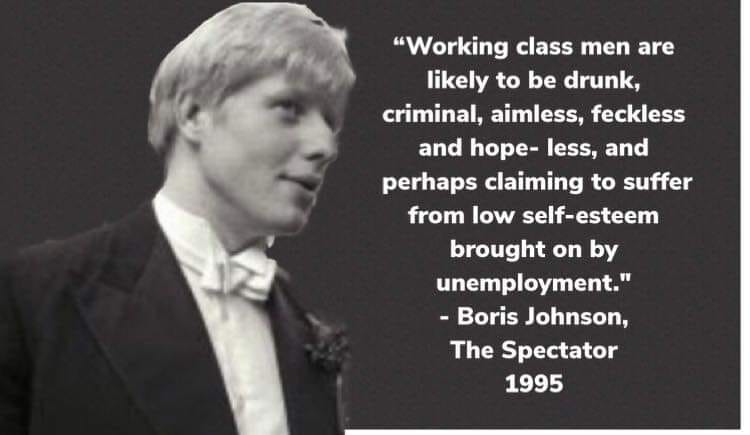 What you have to remember about all these Boris Johnson articles is he is a product of an elite education. A system designed to mould people in to their full character. To create officers, gentlemen & leaders. They are taught politics, they are expected to question & be questioned.

The idea being they will see all sides of an argument. This is how leaders are made apparently but let’s not knock the system for the moment. Snobbish edges should be knocked off yes they should as students are challenged to defend them. They debate ideas and it’s hoped they will come out all the better for it.

Now, I’m sure the are lots of people who come out of this system balanced, accepting how fortunate they are and their views will be far more generous and accepting than Johnson shows in these articles. Shell we term it far less SNOBBISH & more ENLIGHTENED to the world.

So what you are seeing here in Boris Johnson is the real man, his real opinions after all that education. He’s failed to take on any ingredients that some say would make a leader. The only time after all that education that he’s bent his basic entitled spoilt child opinions is when it’s suited him to do so, when he’s getting something in return, for political gain – a thing he is still doing now. Only a fool will vote for such a man.