Yes, it’s another Brexit article but this blog is not on any prefined path it’s just what I want to sound off about at the time.

The truth is we have a lot to be thankful for with the advent of the Brexit calamity. But that’s only if you are sensible enough to see why you should be thankful. This post is not about the right or wrongs of leaving the EU, let’s set that aside for once. Let’s concentrate on what’s been happening to our politics for some 20-30 years and how it’s affected the country.

This was a big issue years before the EU referendum. The concern was we had too many career politicians and not enough life experience in parliament. The concern was that politicians were looking for what would win them votes not what was right for the people or the country. This is never more born out by Tony Blair’s failure to reverse Thatcher’s policies of division and to supplement that the Blair & Brown government went further with measures against the working class fundamentals of the Labour movement – they endorsed the Tory austerity for no other reason but because they thought if they were not hard on those claiming benefits it would lose them, voters,,. How much further from real life experience could you be? 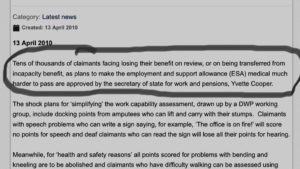 But be thankful, Brexit has given us a light to shine on these people and weed them out of politics never to return. The past few years have seen lie upon lie exposed, be it on the leave or remain side, be it on the leave on best terms or leave with no deal and fuck the EU terms. It’s up to you to suss these lies and make a note of who says them. But it can be hard to stop because the lie might not be revealed in the actual action or comment. Here’s a few;

The first an easiest to stop – “Bexit will not harm us” Any change of this magnitude will harm our economy in some way if only short term. Decimalisation harmed us, the war harmed us big time, closing the mines harmed us, the Falklands, Iraq harmed us and so will leave the EU.

There are a number of statement about Labour’s part in Brexit that can be collected and answered in one – Labour is not in power, labour cannot stop, change or introduce anything that might make those people who want to remain in the EU happy. Anyone, including Labour MP who say they can are lying.

“No deal Brexit is a cliff edge” – This is banded about a lot and on the face of it, you can see why people will think one day we will be in and the next out of the EU. The truth is politicians talk but business takes action. To get goods from A to B business needs a process and within that process are rules & regulations. One rule stays enforced till another rule replaces it. On that basis, business will set about actions to make sure they are still able to move goods around the EU and get them to here in the UK. Time does not stop still, it’s just stupid to say planes won’t fly and cargo won’t be able to come into the country. It will because it has to that’s the business of business. It’s fair to say other things will be affected by a no deal but these are likely to be the 1000s of things no one thought of. When they impact solutions will be found.

“The majority of Labour members want a People’s Vote” – Some simple facts dismiss this even if contrived polls try to prove it. 1. The majority of the country don’t want another referendum. In fact, it’s laughable that you can hear someone say the “People want a referendum” but also in the next sentence they’ll say “people don’t want a general election” to my mind they are both the same. The only people who might think otherwise might be Tory party members. 1. The majority of people who voted leave don’t want a second referendum. 3. The majority of MPs in parliament don’t want a second referendum. The People’s Vote is a typical example of what can be achieved with the right people in the right place and a big bag of cash to splash about. You have remembered the LibDems were banging the drum for a 2nd Ref and ran at the 2017 general election as the party who would hold one. Their vote plummeted, people were not interested and they have not changed their mind. The media have a large part in this, the should have killed on this idea simply on the basis of the damage it does to our democratic process but they’ll keep it alive. I think for the same reasons they built Farage up – it makes good print & TV.

So yes be thankful, you can see these people for what they are. I would go further and say no politician asking for your vote who will not honour the democratic process is worth your vote. And if the EU referendum is overturned what reason would you have to think your vote means anything at all. That prat David Cameron said about the Referendum it was our choice, not the polititions, it’s up to them to deliver it now.