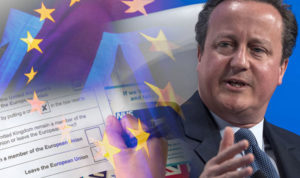 A while back I wrote about how the way Brexit has gone underlined my reasons for voting Leave even though I would not class myself as a nationalist and more European than anything, hell I don’t even support the monarchy or war. The basis of my vote was we had never been part of the EU project, our heart had never been in it and our head was only there to use our veto & moan about the money. The majority of our MEPs were anti-Europe and our own government used the excuse of the EU to prevent them doing things they didn’t want to do.

So once again I can claim to be right here. The results of the less than 40% who could even bother to comment show that clearly. Where they about fishing rights or farmers subsidies or even environmental standards? No they were about staying in or getting out of the EU. But this was only possible because that’s how it was set up by power hungry politicians.

Don’t believe for one minute the Lib Dems care about the EU. Only a year or so before the EU referendum they were calling for us to be out of the EU and demanding that vote. They were half-hearted during the referendum but their ears pricked up when they saw the result and how they could exploit the losers of it. Similar story with former National Front wide buy Farage who, failing a number of time to get elected in parliament with his racist policies, saw his chance in the EU elections which, with a turnout as low as 15% in places was a much easier place to win. And we all know by now with all his year as an MEP is done less than 25% of the work required because he’s failed to turn up to over 75% of the time to cast his vote so how is he representing the interest of the people? Other revelations have meant a number MEPs have been fined by the EU for misuse of their expenses.

Only 17,199,701 people bothered to vote ( that’s less than the leave vote in EU referendum of 2016 where turnout was 71.8%, with more than 30 million people voting) – north-west down to 33% – north-east 32% – south-west lovies 40% – eastern region 36%. So once again we have elections and no one cares about the politics of Europe. It’s like being a member of a golf club and having no interest in golf or worse your only interest is to dig holes in the greens so the other members of the club find it harder to play a proper game. We are better off out of it, surely the experience of the last 3 years alone tell people that. Sure they’ll hold some sort of interest because they think they are losing something and yes some people will lose out but if we are not committed to making the EU a success and if the EU are determined to make progress on strangling powers to help people, it’s best we are out.