I think the are now very few people who don’t realise we need to contribute more money to the NHS. Perhaps some hard Tories think the best way of dealing with the NHS problem is to allow private companies run. In the logic world that doesn’t matter as even that drastic act would result in the public paying more towards the NHS. The other option is to increase income tax or setup a direct NHS tax from PAYE.

Neither of these look faibale mainly because it doesn’t take the NHS out of politics. Sooner or later one party or the other would target how much NHS tax we pay as a voter winner. And let’s not forget National Insurence was meant for the NHS amonst other thing but now it’s just a sneaky way of making people think they are paying less in tax as both income tax & national insurence go into the same pot. Surely the same could happen to any NHS tax.

I have a rather more strauighforward suggestion, one which will be long lasting and more or more or less painless, it also has a nice side effect which I’ll reveal later. 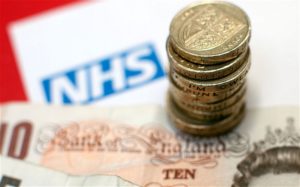 My suggestion is to add betweent 1% and 10% to all online payment transfers done in the uk. This would be an online shopping tax if you need a name for it. This should be an easy process to setup by simply tagging it on to bank transfers and having banks transfer the money direct to the NHS.
This won’t pay for all the NHS it’s just a supliment. It’s hard to estimate just how much it would raise without knowing a lot of states I don’t have the time to research. But based on last year total online payment of £92 billion it would even at 10% bring in around £10 billion extra but the are other online transactions that could be added and that would bring the percentage down. I’m thinking bank transfers, share dealings etc. When you add in all this it could be that just 1% would create the much needed cash. This would be trival and so easy to sell.
And the side effect is it’s make globelshopping companies like Amazon far less powerful and give local shops in the high street a much need boost.