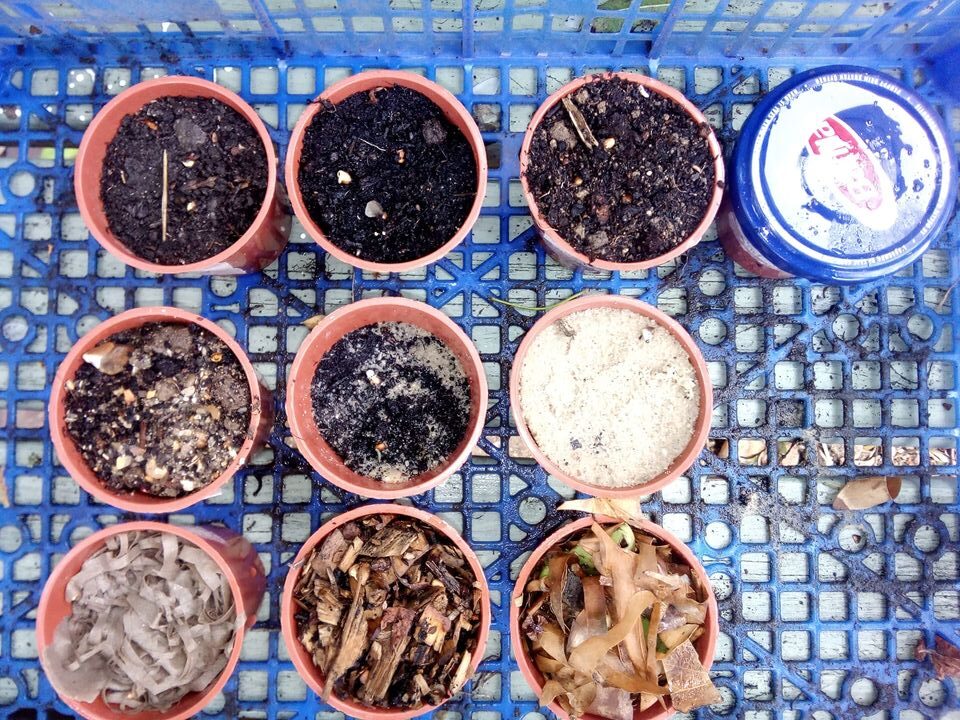 Like a lot of people in the UK I have mixed results with seedling, I’m a real novice but being dyslexic I soak up information very quickly & I’m often able to use logic to quickly get up to speed. To be honest, my favourite hobby is debunking old advice no one seems to question. To do this I need to experiment around a problem. The problem here is what kind of substance is it best to sow seeds in. My own research had led me to believe a seed has all the nutrition a seed needs to grow for about ten days after germination. So the substance you use shouldn’t matter.
However the are other reasons for picking differing substances, for example root growth & easy transplanting of the seedling should that be needed later. This experiment is a bit of lockdown fun, it’s not intended to be anything else. You can take what you want from it, you can discard it as pointless but it will inform my own choices for seedling in future & I hope you get something from it.

THE FIRST WEEK – Radish germinate very quickly that’s why they were chosen. So what can we learn from the first week? First, the was a question about if covering seedling and making sure they were in total dark would make the germinate quicker, the answer here is no. In fact the pot with the lid on was the last to germinate – was that because the lid didn’t allow air-flow or the soil was too warm?
One of the first to germinate was the sand which surprised me, in fact it seems the sand allowed the seed to quickly dig it’s roots in but then grow was a bit slower then some of the others after. The leaf pot germinated but as you will see later that’s as far as it got. Another surprise was the seed sowed deeper – the other seed were planted on top and just pushed into the surface, 2 pots the seed were planted 15-20mm deep they both hit the light at the same time as the others. At this point all pots are viable plants. 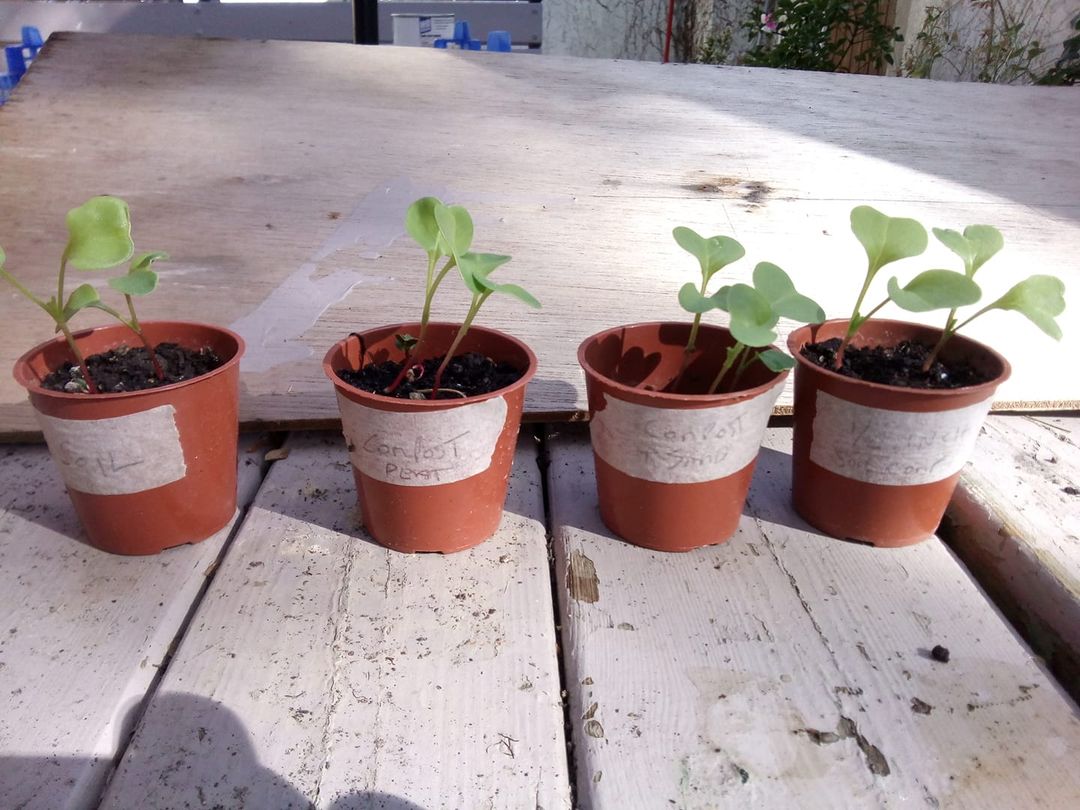 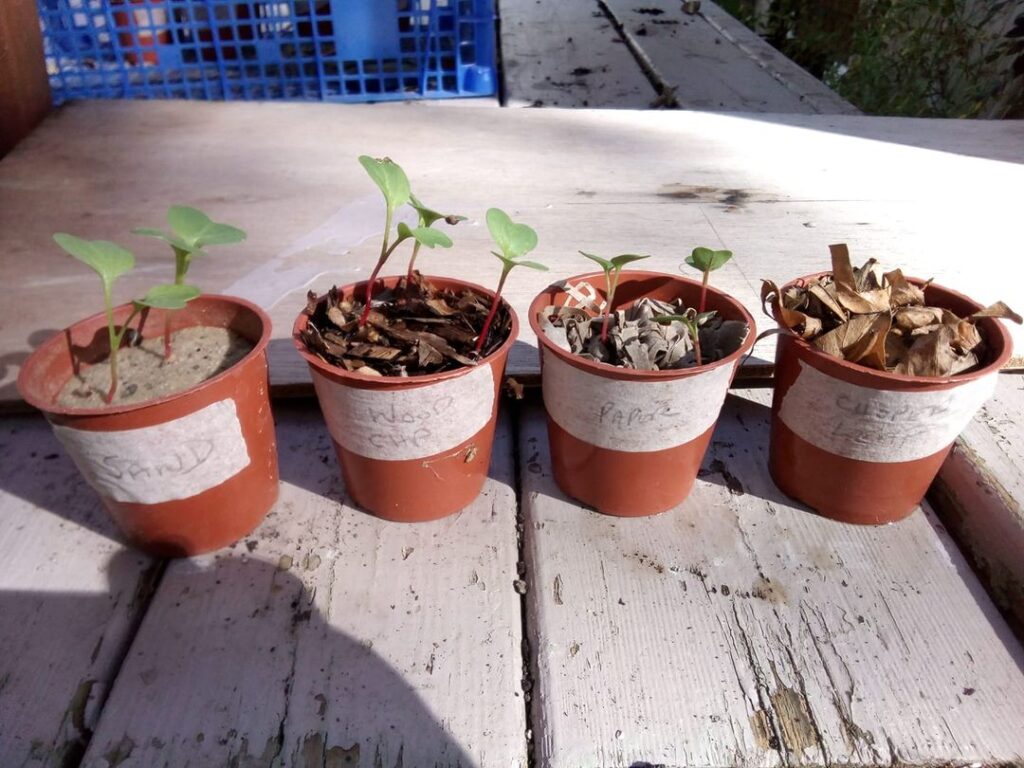 THE RESULTS – Not conclusive on some things but very conclusive on others. I think we all knew special compost for seedlings was not needed but we strive for the best results and anything offering to improve those results will find a market. And it’s probable that with other seeds & over a longer period these special compost come into their own. But you need to understand why? and for some people spending money in other areas might be better for their all round results. So let’s take a close look at the result individually. 1. Garden soil –  This can be look on as the base point. But we are not looking for which one produces the best plant here remember, we are just seeing what happens. It’s interesting that this was the last to germinate and really it didn’t push ahead until week three. I suspect this was because nutrients in the soil kicked in when the seed needed them.  Your soil might not be as rich as mine. 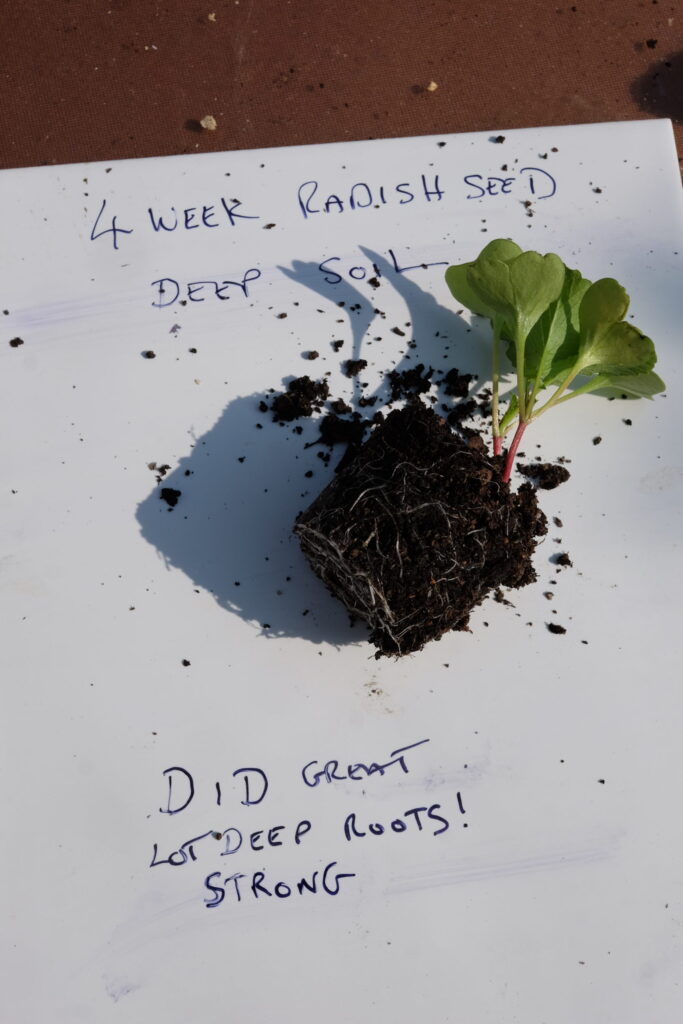 3. Garden Centre Peat Compost- One of the first to germinate but not a great root system produced imo, thinner and was differentially starting to struggle at the end. I put this down to the peat holding too much water. But in general fine for starting seedling off. 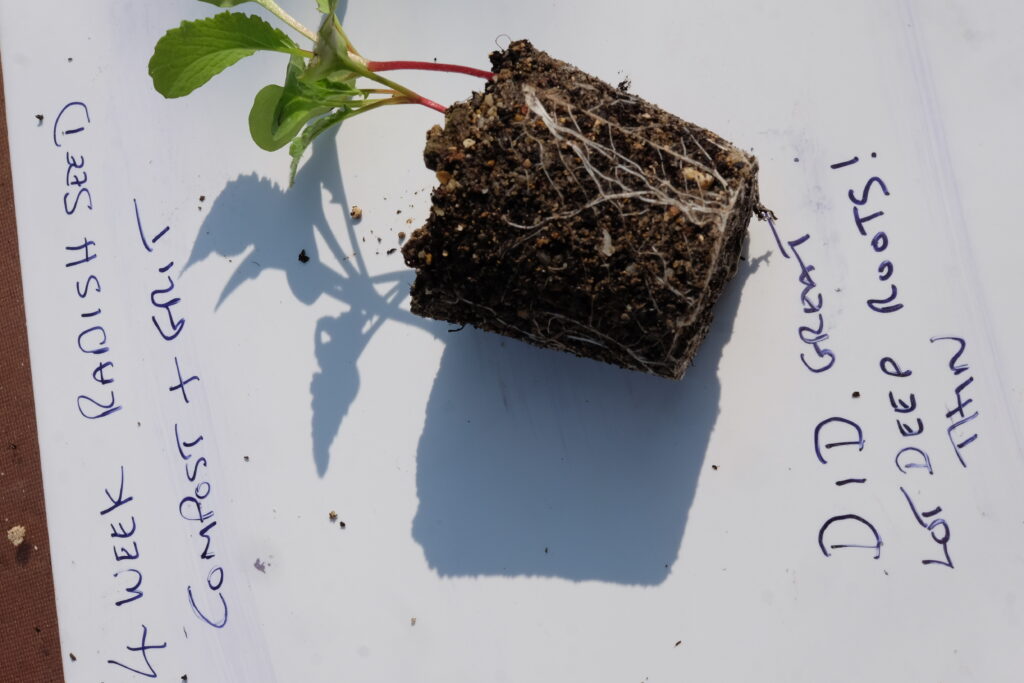 4. Garden Compost & Grit – This was going great guns at the end. Better defined leafs and although the image text says thing roots on close up inspection I not sure if that’s true. Good result. 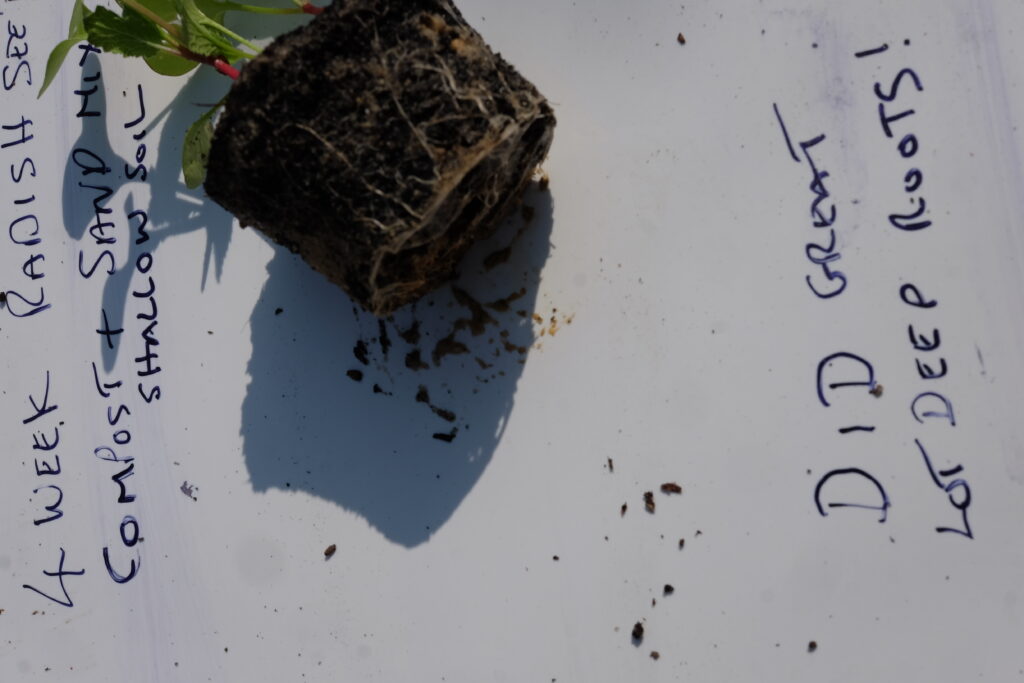 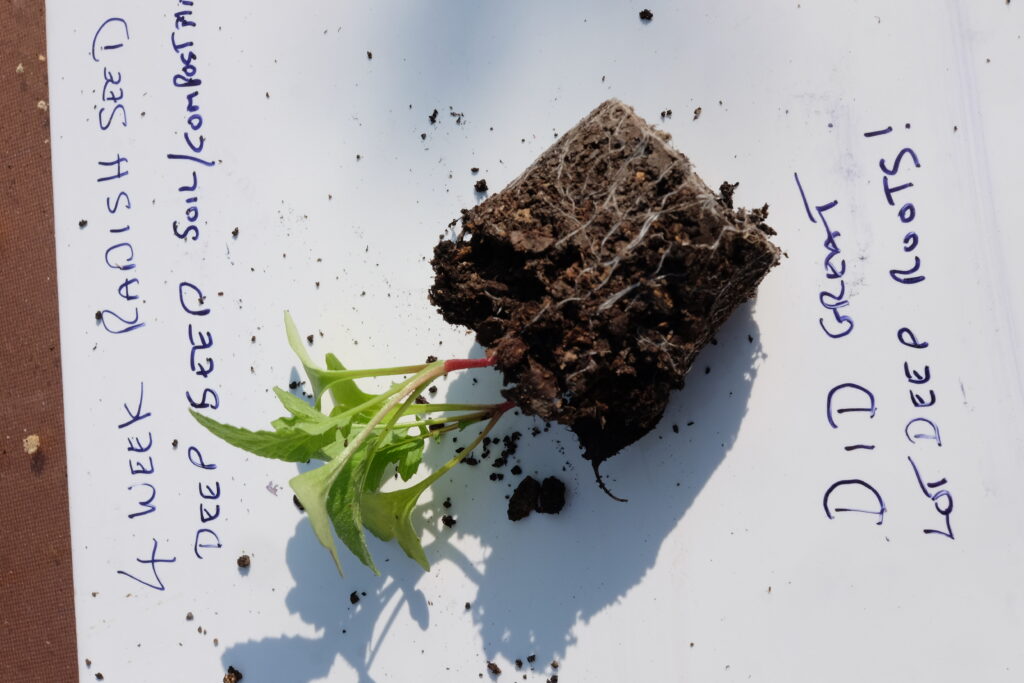 6. Soil + Compost sowed deep. Certainly a stronger stem from sowing a bit deeper. Apart from that no different to the soil or compost seedling. 7. Sand – This surprised me, standard builder’s sand I had left over from a pointing job. Look at how thick those roots are and how deep. At the end it was struggling and that’s to be expected as sand has no nutriments in it. So to maintain growth you would need a liquid feed but that gives you more control I suppose. 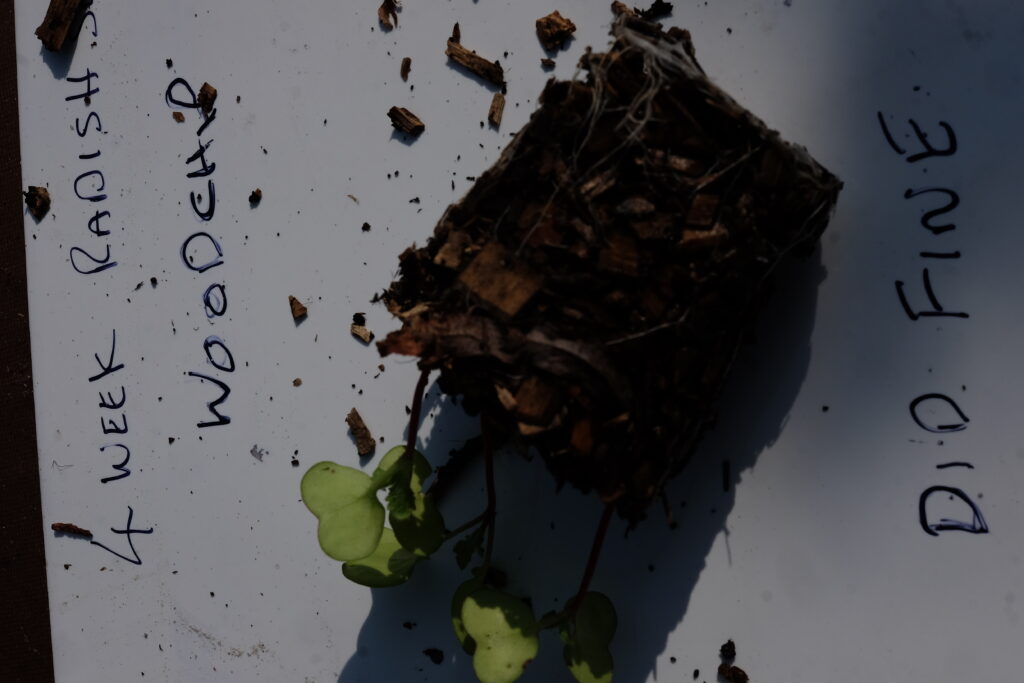 8. Wood Chippings – Did rather well, not as good as some but produced a decent seedling that was still going fine at the end. 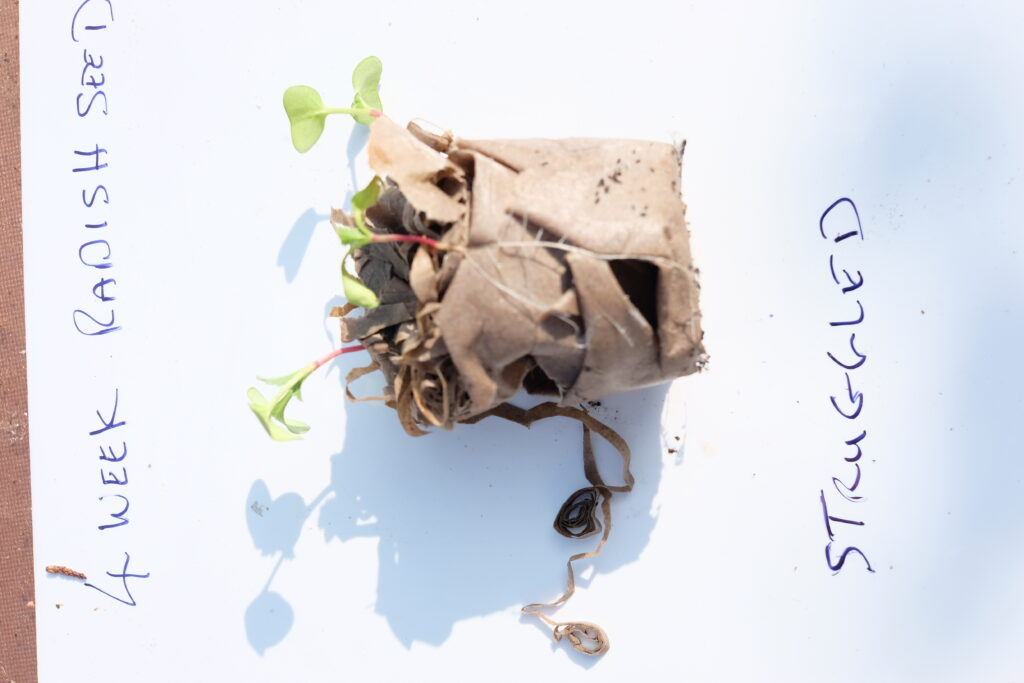 9. Shredded Paper – One of the first to germinate, but the texture of the paper meant it struggled to find a rooting. Although when the roots got down you can see they stuck well to the paper & produce some fine rooting system. Certainly this medium could have a place, and the pockets of air seem to have been not problem at all. Bit stunted as a result of it’s struggles. 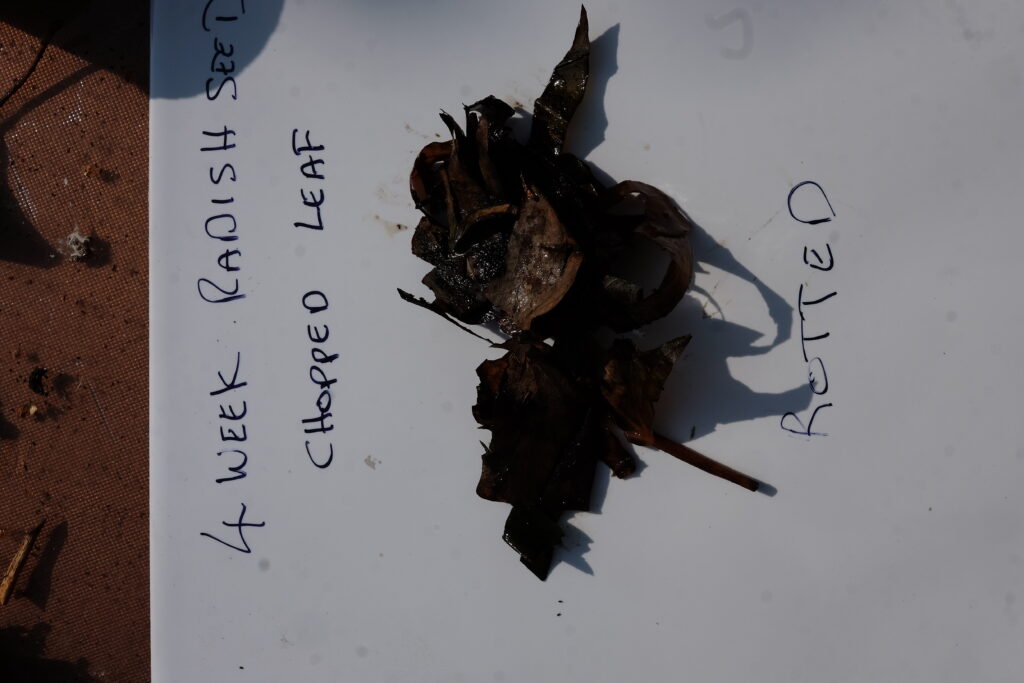 10. Leaf chippings – The seed germinated but soon struggled to find a footing to root down. This may have been down to the type of leaf used – mainly ivy. The seedling was soon killed off in about week 3, again this could have been the surface of the leafs used. Fair to say this is not recommended 🙂

CONCLUSIONS – Well I’m certainly going to be using sand more in the garden. Paper too, imagine a pot filled with paper and say 5 cm of sand on top, that might well be a good way to grow carrots or turnip. The seed gets nice clean comfy bed then a cosy blanket for the carrot to form in. Certainly also going to mix up the level at which I plant seeds. So many packet suggest just on the surface and I’ve found that often result in seedling falling over & pushing themselves along till able to dig down.

I hope to enjoyed my little experiment, feel free to comment or suggest ideas for more. Perhaps you want to test one of those gardener’s rules.