I have some sympathy for Theresa May. Well, I say that, I would if it’s not already been used up for the victims of her party’s policies. But we must go back past  23 June 2016 to the time David Cameron was standing waiting to answer questions about the forever increasing influence of Ukip on the Conservative party. Faced with a constant flow of votes from his party to UKIP he panicked and went off his script to announce if the people voted for him & his party he would give the public a simple IN & OUT vote on membership of the European Union. But Deadly Dave Cameron went far further than that didn’t he… all the way up to the referendum vote he was pestered with civil servants pleading with him to have a plan for if the result of the EU referendum was for the UK to Leave the EU.  He batted them away and even worst instructed that no such planning should take place. In the last few days Theresa May’s government became the first in history to be found in contempt of parliament when the refused to publish Brexit legal advice but I suggest the Tory party were guilty of both that way back under Cameron but he was also guilty of contempt of the British people with his actions at that early time. 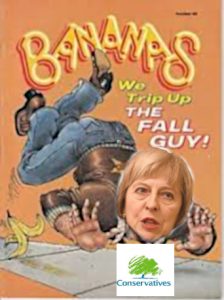 So we move on to the days after the people of the UK voted to leave the EU. Total panic in the Conservative party headquarters (the people we don’t see) banging their fists & gnashing their teeth as the real power behind the party realised because of how close the EU vote was whoever delivers what become known as Brexit will have that shadow over them for many years. When this fact eventually filtered into David Cameron’s head he decided it wasn’t going to be him so resigned as Prime Minister almost instantly.
That kick-started a leadership race and a number of big hitting Tories staked their claim. But one by one they too realised the job they where applying for was a thankless task, it’s very possible that these people were tapped on the should by those who move in the shadowy corners of the Conservative party “you don’t want this”. At these times when all others are running for the hills being stubborn is not a good trait as you will surely be left holding the bag and so it was that Theresa May became the Conservative party’s fall guy for the Brexit years.

And she took the role better than any of those people might have even hoped. Let’s face it, we still get claims of a Labour caused recession some ten years after the banking crisis but how many times have you heard any political journalist mention Brexit as a national crisis caused by the David Cameron never mind the general term of Conservatives. She’s managed to get them completely off the hook with her ineptitude at the job. So when her government falls as it surely will soon, they … the Conservative brand will have washed their hands of the whole Brexit debatable.

Theresa May will surely go down in history as the worst UK prime minister in history, and so she should. In fact her legacy was already bad before she became the fall guy for Brexit. Windrush secured that for her, so let’s not shed any tears for the wheat worrier at this time or in the future. Some Tory members wanted the second coming of Margaret Thatcher, they couldn’t have hope for an updated version two as we have witnessed. Thatcher’s cruel legacy still harms the country in many ways, not least in the lack of council housing which causes the homelessness we see. We can only hope Theresa May’s Brixit can be stopped and her reign ends early so the Labour party can deliver the Brexit the people voted for in a fair and harmless way as possible.