First, let me confess I voted to leave the EU. But unlike some people, it would not be a big deal to me if we stayed in the EU. Not that I’ve changed my mind I would still vote to leave.  The EU for the most part I think it’s been a positive thing so like perhaps 99% of the UK public I never asked the question but for the first time I was forced to think hard about it. I decided the only way to end this constant moaning & political arguing about the EU was to leave it. It’s not as simple as that but the main reasons circle around the notion that – as we were not prepared to be part of it fully we should leave. I know we’ll be fine in the end, although I understand things will be difficult and the is no such thing as a soft Brexit. You can’t take short term views on things like this, I was look ten, twenty years not just to next year holiday plans.

A major problem a lot of people had and still have is they are now thinking of as a European, indeed a lot see themselves as one, I’m not saying they are wrong just trying to explain why their views would contradict so much with people like me. Not that I’m much of a nationionalist but I’m not a European in mindset I know that. For example Europe vs USA? in sport or anything else means nothing to me. UK vs USA, UK vs Europe? almost always UK.

Yes, people were trying to manipulate voters during the referendum, lies were told but then lies have always been told about the EU so nothing is new about that. What does make me laugh now is people use the idea of this manipulation as a way to re-manipulate the same people. They say things like 70% voted to leave because of a sign on the side of a bus. More recently I’ve been told, “70% of Labour votes in the 2017 election were from people who thought Labour would keep the UK in the EU”.

It’s safe to say these people telling these lies now are those who are desperate to stay in the EU and you can get a better sense of their desperation by looking at the weeks shortly after the EU result. At this time the very same people were pointing their finger at the old & the poor calling people racists and saying things like “They don’t care they’ve lived their lives”. I find it really rather incredulous the way the racist narrative has totally subsided, you would think there had been an MSM censorship directive.

Naturally what keeps the disappointment movement going is the fact the referendum result was so close. And I think there has been movement and perhaps enough movement for the Remain vote now to be the larger vote. But the fact remains that the vote that matters was 12 months ago now and the are polls that show a second referendum would not only maintain the distance but increase it. But how valid is this faint call for a second referendum? some say the must be one on the basis that some people have changed their mind, I don’t agree. 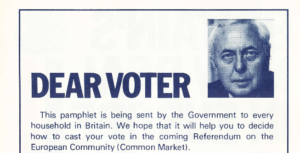 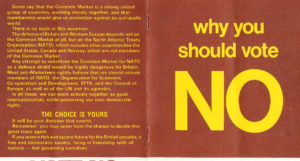 67.23% of the vote took us into the EU back in 1975. So last year’s winning margin wasn’t so much 3.78% in 2016 but the fact the EU supporters had dropped by almost 50%. This is a massive majority and should be enough to convince any that the EU support has drained away and would continue to do so if things continued unchanged in the UK.

But I don’t want to be too negative towards people who voted remain, as I said at the start I’m no drum banger for leaving myself, all I am doing here is trying to throw some balance and logic on this idea of a second referendum as I feel this hasn’t been thought out to well. It’s clearly just a measure of what some see as a step to blocking the whole process of leaving the EU. The argument for not leaving was lost a year ago and it can’t come back unless they first plant the idea that people are changing their mind. But what does a second referendum really mean in reality?

Well let’s say they get it and also let’s say they are right and ok, let’s say a lot of people change their mind and even let’s say %60 then vote to stay in the EU. Is that it?  job is done?
They would hope so but no, the ball now switches sides and the Leave voters replace the Remain voters sitting on the high horse telling people similar lies. But hold on don’t they have an even better case for a third referendum? they’ve won one and they’ve lost one so on we go to a decider. Not right away because people will spend months assessing why the vote changed and we would also have the legal and parliamentary process to reverse the Brexit process all this takes time and the are bumps along the way and things that might not be in focus now will appear and give Leavers chance to take their claim too. So perhaps two or three years from the first referendum we face a third and final but what damage has already been done by then? it’s a future no one would want and one we won’t see because the won’t be a second EU referendum. People should accept it.

That’s not to say the EU referendum cannot be overturned but it would be a brave party who did that. For a start, it would open up debates on corruption but consider what it would mean to all those people who decided to vote having seldom or never voted before. We often heard that one reason given for not voting is “they are all the same”, “my vote won’t make a difference” etc. Well overturning the EU vote would prove that right and perhaps 20% of those who voted in the EU referendum and a lot of those continued on to vote in the 2017 general election, would be put off and maybe not vote again. But for years after overturning the EU vote would be used as an excuse NOT to vote.