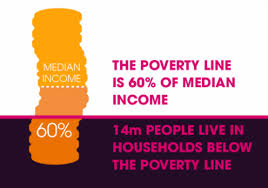 You’ll never hear a Tory MP say the word “poverty”, although you may hear them say “absolute poverty”. Ever wondered why that is?

Well, these are two agreed terms that mean different things. The Tories will be happy to claim absolute poverty since they came to power in 2010, has fallen by 300,000. Sounds great, doesn’t it? till you realise what they are claiming credit for is the 5th richest country in the world managing to reduce the number of people who have nothing at all by 300,00.

This is almost certainly not a result of government policy & in fact, the UK should be embarrassed that some of their people are in fact totally destitute and have nothing not even the means to feed & cloth themselves. The UN Criteria definition says ‘a condition characterised by severe deprivation of basic human needs, including food, safe drinking water, sanitation facilities, health, shelter, education and information. It depends not only on income but also on access to services.’ Absolute poverty is something you might expect in an undeveloped country where perhaps the building of a water supply or the discovery of a resource would result in improvements.

Poverty, on the other hand, is a good way to judge how government policies are affecting its people. This measure is a comparison. To be classed as in poverty mean you have less than 50% of the average person needs of the other people in your nation. Criteria definition ‘Poverty is pronounced deprivation in well-being, and comprises many dimensions. It includes low incomes and the inability to acquire the basic goods and services necessary for survival with dignity.’

So it’s a stain on the nation to even have one person in absolute poverty but the Tories love it because it’s improving slightly.

Another game they play is with benefits and income tax. The tories will claim they are helping the poorest people when the increase the income tax threshold. This is the point where people start paying tax. But in truth, if you are able to pay tax you are not the poorest and by reducing the tax threshold they reduce it for everyone right up to the highest earners. If you don’t have a job how does this help you?

And of a cause, they’ll are happy bleat the best way out of poverty is to get a job. That’s a bit disrespectful to those unable to work for reason of ill health or other reasons. It also ignores the fact that 4 million people in poverty are in work. But for the Tories it’s all about making the right sounds, isn’t it?