If you go back in time a politician was someone who saw a problem and thought they had a solution. The problem generally would be affecting many including the whole country and the solution would be aimed at fixing that problem for all. Even long before the Labour party was thought of this tended to be why people went into politics. There were people with grand ideas on how the country should be run yes & there were people who knew from the day they were born they would be politicians and we still have those. But in the main now politics is not about the public and it’s not even about the solutions, the vast majority of politicians now are about the position that makes them look best in their targeted audience – these people think only in terms of “vote catchers”, they’ll sell their soul for a vote catcher policy.

There is a lot of media speculation that lying is now not only accepted but expected in UK politics. Both Johnson & Starmer think nothing of saying one thing to one set of people and then a week or so later say the compete opposite on TV because it’s a vote catcher say their researchers maybe.They get away with this because the reporter is either too stupid to know they are lying, not listening to their answers or been told not to contradict them. And yes, broadcasters do instruct their reporters on whether to contradict or not. Only recently the BBC admitted it had instructed their reporter to contradict someone they were interviewing who call Jeremy Corbyn an anti-Semitic. The reporter was instructed to say the were no grounds for that accusation none at all.

The situation now is no main party has a manifesto or even an ideology based on improving the country or the people within the country. The only goal is the vote and then when they have that it’s either keeping power or trying to gain power and the way they do that is changing there mind to suit what the researchers tell them. To be fair to Boris Johnson he does also include his own personal bias & racism, where as Starmer and the other lot are just hawking around TV stations with their goods for sale like Del Boy “what you got for sale?” – “What do you want?” 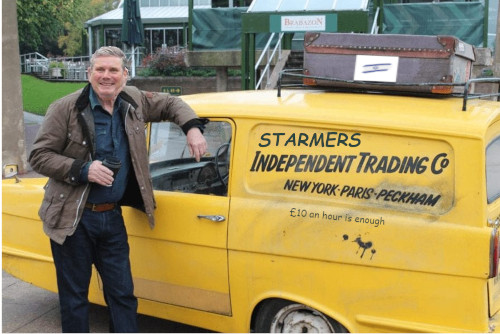 Just look at the way Starmer acts as leader of the Labour party. The Labour party policy and his own agenda are miles apart on different subjects from the Min Wage, to Israel. Privatisation to Trans rights. All these things he has a very different view to the members of the Labour party. But he doesn’t care he blusters his way telling lie after lie. And while he’s doing this he never gives a thought to people, how to improve their lives or this country. His only objective is to catch a vote.