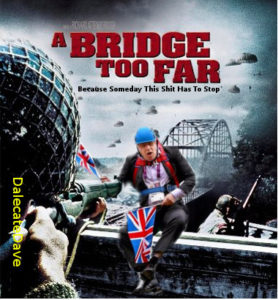 We really must talk about how one man named Johnson who, let’s be honest, is not some wise guru full of wisdom, gets to fill miles and miles of newsprint with his utter tripe.
The BBC seem to follow him around with buckets collecting his shite. It pours from his mouth and within hours it all ends up on the front pages and main tv news. I’m totally pissed off with the pompuse woolybear saying something at the end of the week and having to put up with a forced narrative the whole weekend when the are far more importent issues that people could be discussing on the weekend politics & news shows. I mean for fuck sake last year we had over a week where every fucking day people where spewing out nonsense about one a single word that fell form his arse faced mouth. He had what it meant, why he used it, where it was first used and if he should be using it? who fucking cares?  treat him as he should be treated, as some blouted moron of little value to anyone but thats who agree with his deranged view on life.

Build ya fucking bridge and jump off it ya two-faced trumped up weak minded pig in lipstick.