Following the failure of the LibDems to gain votes in the general election of 2017 the idea of a second referendum should be dead. But a number of powerful people and MPs acting like spoilt children created a Brand to re-promote the idea on 15 April 2018. They called this idea a People’s Vote. Superdry co-owner Julian Dunkerton has given £1m to the cause but with people like Tony Blair & Alaster Campbell also backing the campaign who knows how much or where else their cash is coming from. 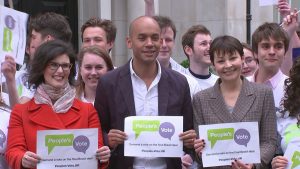 You wouldn’t think to turn one of the most important issues the UK have ever faced could be turned into a product similar to a bog roll but this just shows if you have enough idiots around and enough money you can make a lot of the UK public do almost anything.

Added by a bias media & a fair few of the 16 millions remainers who don’t understand neither democracy or politics the People’s Vote brand has made great strides in terms of coverage. Most political TV shows have one if not two of their supporters spouting their nonsense and every other question to a politician is related to the brand in some way. Creating a need, creating a desire is the aim but let’s be truthful here nothing has changed.

It’s just coincidence that all the members of this Brand want to block the UK leaving the EU. Another coincidence is all the Labour MP who supported it from the start want to be rid of Jeremy Corbyn. Why would that be important? well to have at least a chance of a second referendum the brand will need the support of a Labour whipping motion. Corbyn is nothing if he gives up this democratic principle and that’s the key here. The Labour vote is set to be split down the middle on Brexit if Corbyn abandons democracy without a cause that would satisfy the leavers then Labour’s vote would plummet. I confess here now that if the result of the referendum is not respected I’ll never vote again in any election because the would be no point to vote if that vote wasn’t worth anything.

But the logic of a second referendum is totally ignored in these people. The quickest a referendum has ever been organised in the UK is 40 weeks. From the time of publication that means they get their vote in August 2019. But no they won’t because before that laws have to be rescinded and new laws have to be got through the house of commons and the lords, imagine the problems that bring. For that reason their People’s Vote might have wait for 18 months. And what happens meantime? what sort of debate will be had on the streets? people are going to be angry very angry.

But these people don’t care about that, remember for most of them it’s only the side issue and for other, it’s a cash cow from the millions being poured into the campaign. Here are just two of the stupid ideas they have come up with to force this thought;

One – 40 MPs sign a letter to Jeremy Corbyn and hold a press conference demanding Labour call a no-confidence vote on the government. The only reason they want this is so it fails – Labour doesn’t have the votes to get is passed they now that – then they think Corbyn will be forced to support the Brand because he only has one attempt to force a general election with a no-confidence vote. I won’t work.
Two – The trolls supporting the brand are having a big push to replace Jeremy Corbyn with Evyeet Cooper. This is not going to happen but they don’t even understand the process needed to do that. By the time that process is done, even if they got their way, Brexit would be long done & dusted.

All the fuss, all this trouble, all this money while people are starving and dying on the streets of the UK. Stopping Brexit won’t stop that that and in fact it would enbid their Tories even deeper and give them another three years to do their damage.